How Copper Piping Overtook Other Types of Pipe Metals 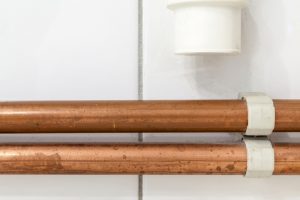 There is a long history of different materials used for pipes in homes. Today, the most common metal used for indoor plumbing is copper. Copper started to take over for other metals in the 1970s, and by the 1990s had replaced such older materials as clay, cast iron, lead, and galvanized steel.

Why did copper become the pipe metal champion? It’s a combination of what’s wrong with those older pipes and what’s so right about copper.

The benefits of copper

Ask any professional plumber in Lake Mary, FL who does repiping work, and they can tell you about how easy copper is to work with. It’s a lightweight metal and cuts easily. For a homeowner, it has a number of other big advantages:

The problems with the older metals

To give you an even better sense of why copper superseded other piping materials, we’ll explain why these metals went out of use.

We want to note a type of plastic that copper overtook as well. During the 1970s and all the way into the early ‘90s, a type of plastic called polybutylene became common for plumbing systems. However, polybutylene has proved itself prone to breakage and is no longer used. If your home was built in the 1970s or ‘80s, we recommend having any polybutylene pipes replaced—before they force you to replace them.

If you have a home that was built before 1970 and it has never had any repiping done, it almost certainly needs to have older metal (galvanized steel most likely) removed and replaced with copper—as well as plastic pipes. You only have to call our experienced plumbers to assess your plumbing system to find out how much repiping the house needs. We can take care of the work fast and right.

Replace those older pipes with the best in modern materials with the Modern Way contractor: Modern Plumbing Industries, Inc. Serving Central Florida since 1975.